AmeriCorps NCCC is back!

The NHRP’s eighth AmeriCorps NCCC team, Blue 1 arrived at Camp Harmon on February 28th, and they will stay with us until April 1st when they will leave for Idaho. Although we did not have the usual 14-week stay, we were fortunate to have them for a shorter period of time.

This year the Native Habitat Restoration Program (NHRP) shared sponsorship of the NCCC team with Camp Harmon and the SLV Water District. All three sponsors collaborated to support the team with housing, food, and education. As in all past years, Don Alley gave his informative lecture to the team on life in the creeks and the river of the San Lorenzo River Watershed.

The team worked on different projects for each sponsor. For example, the team continued working with Linda Skeff on the NHRP plan to create a native plant demonstration garden at the SLV Museum, where Lisa Robinson has envisioned a garden of native plants used by loggers and miners for medicinal, nutritional, and industrial needs. The VWC will be supplying funds for the purchase of these plants. The NHRP and the team, in conjunction with Carly Blanchard, Program Director of the SLV Water District, worked on the ongoing construction of a meadow around the solar panels at the Kirby (Felton) Treatment Plant in the second week. This demonstration native habitat pollinator meadow will utilize the land around the solar panels as an extension of the Felton Library Discovery Park native gardens and create a carbon sink.

Finally, at Camp Harmon Blue 1 assisted with building maintenance, painting, hardscape, and landscape. The team also worked with the NHRP in the initial phase of restoring a culvert at Camp Harmon which will become a demonstration bio-swale of native plants.

This outstanding and committed 8th team has built upon the previous restoration work on NHRP project sites contributing to the program’s long-term vision of protecting the San Lorenzo River Watershed.

Removed blackberry canes and ivy from an existing culvert. Next year we will create a demonstration garden by planting the embankments with native plants and creating a bio-swale.

The San Lorenzo Valley Native Habitat Restoration Program integrates environmental and community needs to restore the riparian habitat and ensure the ongoing health and beauty of the watershed. 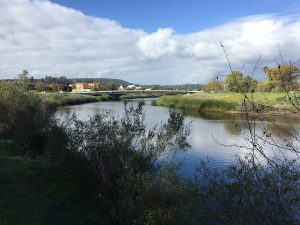 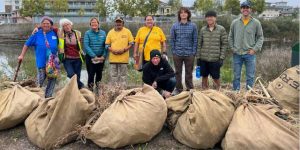 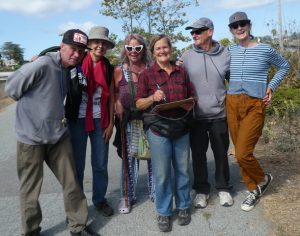